What can you tell us about the fact that COVID-19 infection affects men more than women? Is there any data to confirm this?

“The data available from the Istituto Superiore della Sanità suggest to us that the mortality rate of COVID-19 between men and women is very different (data from Epicentro as of March 30, 2020). It depends on the age group; for example, from 50 to 59 years old, the mortality rate in males is 2.9% and in females 0.9%. Then, it increases greatly with age, and over 80 years, is 34.1% in men and 21.2% in women. Over 90 years of age, the mortality percentage is still higher in males, but the total number of deaths is higher in women because women in Italy live longer on average.
Moreover, in general, more men become ill with COVID-19, particularly from the age of 50 and over. This is a fact that has been observed in many other countries. In addition to higher mortality in men compared to women, we’re interested in the fact that the rate of infection and mortality in general is quite high in Italy, as compared to other countries also very close to us; both geographically and in lifestyle.”

What are the factors (in addition to gender) that can explain the increased spread of the infection in the male population?
“There may be many factors that can help to explain the difference in infection between men and women. I would like to mention first of all comorbidity (i.e. the presence of more diseases), and men are known to be more prone to cardiovascular diseases in later life. Smoking is more common in men, but a recent study in a specialist journal has somewhat reduced its importance in the differences between men and women; certainly not its importance in an absolute sense as a negative factor.
The immune system is instead stronger in women — probably due to pregnancy — as during this period women must reduce the response of their immune system to the fetus and then reactivate it after childbirth”.

You and your research team have focused on identifying possible genetic causes of the increased spread of infection in the male population. Why is this?
“We are Geneticists, and therefore we’ve focused on the possible gender-related causes that depend on genetics and these may concern both the fact that some genes are on the X Chromosome, which as we remember, are present in two copies in females and only one copy in males, and the fact that other genes are under the control of sex hormones. In the latter case, two of the fundamental genes for infection, ACE2 and TMPRSS2, are candidate genes to explain the difference in infection and mortality between men and women.
Starting from ACE2, we must say that this gene produces an enzyme that converts angiotensin, and the gene is located on the X Chromosome. The important thing to know is that the Spike proteins of SARS-CoV-2 (i.e. the proteins that are found on the surface of the virus and that we’ve learned from the many images that accompany the news about COVID-19), bind to the ACE2 receptor when entering human cells. A bit like the virus uses Spike proteins as the key to turn the lock represented by ACE2. However, the key to turn it needs ‘help’ and this help, which Scientists call ‘activation’, is provided by another protein, TMPRSS2, which is produced by its counterpart gene.
Now let’s talk about the TMPRSS2 gene. Unlike ACE2 which is on the X Chromosome, the TMPRSS2 gene is on another Chromosome, but it’s controlled by male sex hormones and to a smaller extent by female sex hormones.
‘Controlled’ means that males express more TMPRSS2 protein than females and may therefore be more susceptible to infection.”

So to sum up, can we say that the ACE2 gene is responsible for the attack of the virus with Spike proteins on the membrane of the lung cells — and that the other gene, TMPRSS2, is responsible for the entry of the virus and the consequent infection?
“That’s right. Moreover, in humans, the TMPRSS2 gene is more active because it’s controlled by male hormones; this means that the virus will find so many cells in the lung ready to receive it, and thus infect the person more severely — causing more severe pneumonia.
Comparing the data in international databases, we’ve observed that there are gene variants of TMPRSS2 linked to the levels of expression of the gene itself that are more frequent in the Italian population than in the Chinese population, and also in other European populations. Consequently, it can be hypothesized that susceptibility to the disease and its severity are strongly influenced by the level of expression of TMPRSS2 — which we remember is controlled by male sex hormones and hence a possible explanation as to why males are more susceptible to COVID-19 infection”.

Could there be other genes that may potentially be involved?
“There are a number of genes on the X Chromosome that are involved in the immune response and may be important candidates to study. Some of these have already been considered in the case of SARS and also with Swine Flu.
We’ve also launched a project called Genius (Genetics Against Coronavirus) which aims to study the impact of genetics on coronavirus infections on a large scale and thus collecting many patients. This is a project that will embrace various research centers in Lombardy, with a view toward collaboration.”

Could there be further investigation?
“No doubt, because the data we’ve published relate to biostatistical analyses we’ve carried out on data in international databases, so our next step will be to confirm these data by making analyses on samples taken from COVID-19 patients. Our goal is to perform very rigorous studies, using samples from the Italian population both as patients and as controls. In fact, if we compare different populations, we can find differences that do not necessarily depend on the disease but rather on the population.
Moreover, the idea is to use a genetic approach in order to study (at the whole genome-level) the factors that can interact to modulate the infection and the severity of the disease”.

What results will they bring? How will these studies be useful?
“They’ll be useful by stratifying patients into those who are at greater or lesser risk of serious complications. For example, in the more fragile categories such as the elderly, identifying which of these have genetic risk factors could allow them to be prioritized and monitored differently.
Another important repercussion is the possibility of understanding whether drugs already on the market may be helpful in combating the infection. It’s already being done, but having a more solid genetic basis would be easier, and using a drug that has already passed human clinical trials would save a lot of money for the development of the drug, itself — and also be faster in providing a therapy”. 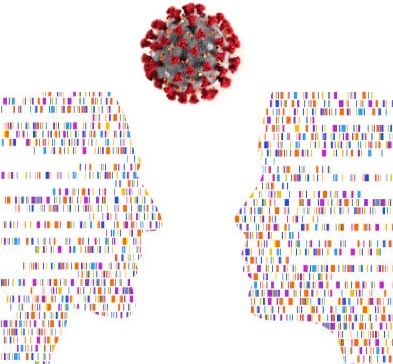